One of the time consuming activities  for a DBA in the sql server world is to work with problems related to poor performance which are due to lack of proper configuration of a SQL Server.Usually DBA's have scripts/jobs/PowerShell scripts to detect performance related issues and fix them.Once a problem is detected, then one would deal with research of different KB articles/ use experience to fix the issues. As part of the SQL Server 2011 release, microsoft also released a cloud service which can be used to monitor different sql server's. Here is a link: explaining the basic premise of the Atlanta tool and the beta version is available for download.
http://www.microsoft.com/systemcenter/en/us/atlanta.aspx
Microsoft is embracing the cloud in a big way and making lot of investments in this area. Cloud is going to be an interesting area to watch out for in the years to come.
Posted by BI_Buff at 12:47 PM No comments:

With the PASS Summit winding down, there is a lot activity in the SQL Server blog sphere about the next SQL Server Release, SQL Server 2011 (Code Name: Denali). One of the areas of improvements which I have been following is the New Features in SSIS. There have been lot of wish lists request, one of the video's/demo which explain these very well is available at the following link: The content in this video is presented by Steve Swartz.
http://www.msteched.com/2010/Europe/BIN303.
The features are broken down into the following areas: User Interface/Designer Experience, Project Management (This explains features which enhance multiple package experience) and Administration.
In The Designer improvements some features explained are Undo and Redo, a new improved mapping editor. This allows one to export and import mappings, this is huge since now it allows the developers to store mapping s outside the SSIS packages. There is also an Zoom in/Zoom out feature which comes in handy while developing complex packages. As part of the Project management, there is a feature called Parameters being added to SSIS packages, communication betwen child and parent packages would improve with this feature.
As part of the Administration piece, a new SSIS server is being built out, this could be installed in the SQL Server instance. This SSIS Server is being built out with the DBA in mind, giving ability to monitor these packages in a more productive manner. In the Adminstration side, the deployment process has become more streamlined and allows one to set parameters and variables by pointing to differen environments. There is going to be a SSMS based SSIS package management feature and dependency analysis.
Posted by BI_Buff at 10:15 AM No comments:

Microsoft has released he CTP1 version of the next version of SQL Server Code named Denali. It is available for download, Quoting Softpedia.com,The first Community Technology Preview of SQL Server Codenamed "Denali" went live on the Microsoft Download Center earlier this week, as Ted Kummert revealed details of the next release of SQL Server at the opening keynote of PASS Summit 2010.
Quoting the http://www.theregister.co.uk/2010/11/09/denali_sql_server_cloud/ article,This version of SQL Server Denali introduces Juneau, what Microsoft is calling a "new-generation" Visual Studio development tool for SQL Server that will bridge the gap between building and deploying apps for on-site and on cloud. There has been a lot of momentum in the cloud space in the last few months. There are 3 major players at this point for the Cloud Initiative, they are Microsoft,Google and Amazon. Microsoft had released its cloud version of the SQL Server Database called SQL Azure close to a year ago and has been refining it ever since. SQL Azure details: http://msdn.microsoft.com/en-us/windowsazure/sqlazure/default.aspx
Posted by BI_Buff at 9:42 AM No comments:

I am working on a project where in I had to analyse DTS packages and figure out the tables being exoprted/imported. The supported environment i have is only SQL Server 2005 and SQL Server 2008, so i needed way to open up DTS packages in SQL Server 2005. Microsoft has a tool SQLServer2005_DTS available for download in the MSDN site. Once this file is download and installed, one would have the ability to open DTS packages from Management Studio. Looka t the snapshot below: 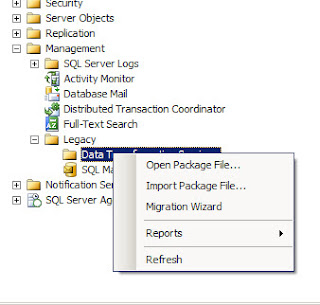