We have a decent size of SSIS packages in Sql Server 2008 where in i import data from Excel Data sources. These SSIS packages run on a SQL Server 2008 box which has a 64 Bit installation of SQL Server. Since Excel is a 32 bit application, in order for the SSIS packages to work I had to use the command line option to run the SSIS packages where in i can invoke the 32 bit SSIS runtime so that it would work with the Excel Data sources. In Sql server 2008 one can use the SQL Server Integration Services option and set the 32 bit runtime check box. This option is available in the Execution Options tab. This way one can move away from the command line option. Here is a snapshot of setting: 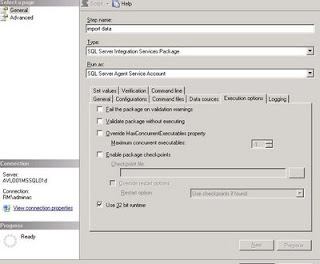 There are Several New features in SQL Server 2008. In one of the instance I had upgraded 2005 SQL Database to SQL 2008. Then later i found out that i had to recreate the database in 2005 again. At this point i did not have SQL 2005 database backup, I was stuck for a while. Then on exploring the various tasks i found the following task which helped do my job. In the SSMS 2008, right click on the database, then click on Tasks, then click on Generate Scripts. 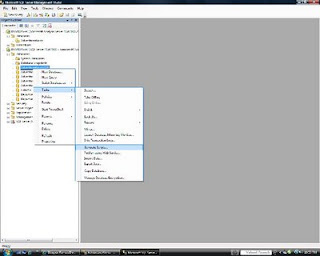 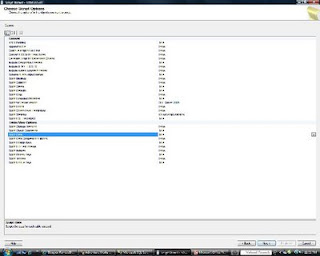 Currently I am involved in the upgrade of Sql Server 2005 databases to Sql Server 2008. I did an inplace upgrade on the SQL Server 2005 Database to 2008, the whole process was seamless. Prior to upgrading i stopped replication and dropped all publications and subscriptions. During this upgrade process i had to upgrade SSIS packages in 2005 to 2008. In SSIS 2008 there is a upgrade wizard which helps one to migrate 2005 packages to 2008.
When I opened up BIDS(Visual Stusio 2008) and selected my SSIS 2005 Solution, the upgrade wizard popped up. 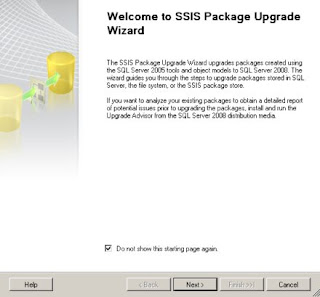 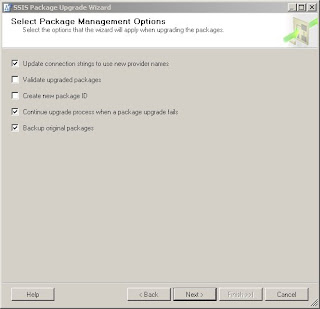 In the next screen is where there is a couple of important options. One of the things that has changed between ssis 2005 ans ssis 2008 is the connection strings to use new provider names. There is a checkbox which provides the option to do the conversion by the wizard itself. Having this box checked is highly recommended, this would make the upgrade process a lot more easier. There is a option to validate pacakges after upgrade and one for backing up original packages.

In the next screen one gets a summary of what needs to be done, once you hit finish the upgrade process starts and provided warning messages/errors once it is complete.

One thing i noticed after the upgrade was if i were using configuration files from SSIS 2005 in SSIS 2008, in some cases i got a XML badly formed error when i executed the package in SSIS 2008. In such cases i recreated the XML config file in SSIS 2008 environment.
Posted by BI_Buff at 12:33 PM No comments:

One of the challenges i was facing while developing SSIS packages was how to move around the packages through the different environments. There is a enable configuration option in the SSIS designer /BIDS. There are different kinds of configurations avaialble. They are:

The options I choose were XML configuration and the SQL Server method. In the XML configuration option, In the Configuration wizard, Once has to choose the location for the XML File, Once that is done in the next screen, the properties for the different connection objects can be saved. This would typically contain the connection strings for different databases. In the final screen one can see all the different properties that are going to save in the XML file. Once this is complete the XML file will contain the important properties needed for the package. When the package is executed it uses the XML file to set the different connections. While moving across environments one has to create am XML file for QA and Production with the connection strings modified accordingly.

There are various other blogs across the web which describe the SQL Server method of configuring, In this case the configurations are stored in a table within a sql server database.
Posted by BI_Buff at 7:19 PM 1 comment: