The other day I happened to add a column to a table using SSMS, normally i use the alter table script to do such a task. Once i added the column and tried to save the schema changes in SSMS i got an error saying Cannot save changes that require table re-creation. I digged around and found that there is an Option in SSMS to avoid such errors and enable table changes. In SSMS Under Tools -> Click On Options, a popup window appears like the one shown below. In Designers option, there is a choice for Table and Database Designers: 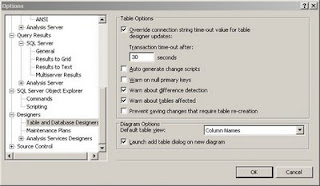 Under Table Options, Uncheck the box which says "Prevent Saving Changes that require table re-creation" and click the OK button.
Once this is done, this should allow table changes to be performed from SSMS, this is a new feature in SQL Server 2008.
Posted by BI_Buff at 6:34 AM