I use replication in SQL Server 2008 extensively, the snapshot and transaction replication methods are used the most. The situation where it is used is that i  replicate production database tables to other (destination) database on a different server, this (destination) database is used as the source to perform all the data transformations. In this way the OLTP production (source) database is not overloaded, while replication was running recently there were some errors. These errors caused replication to be backed up meaning there were rows which were not being pushed down to the subscribers. In the replication monitor, Under the All subscriptions tab right click on the status column corresponding to the subscriber where the problem is occuring. In the window that opens up, click on the distirbutor to subscriber history.  Click on the error line, the error details appear in the bottom section of the window. The error message displayed here is not really helpful, all it does is it shows the Command attempted, along with the Transaction sequence number, note the transaction number which can be seen in the window below: 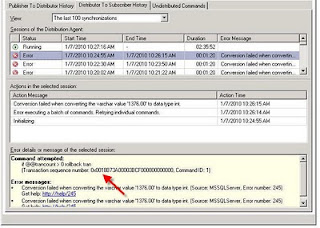