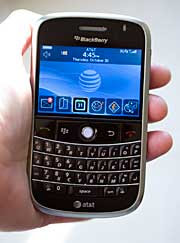 These days smartphones have invaded the marketplace in large numbers. The customer is presented with varied styles of smart phones from different vendors. One of the Vendor which has an impressive array of smartphones is RIMM based in Toronto,Canada. The Blackberry was one of the first smartphones to bring in the combined use of e-mail and cell phone, it became instantly popular in the corporate world as it enabled business travellers to keep in touch with their respective business. Initially blackberry smartphones used keyboard form of inputs. It takes a while for new user to get used adjusted to typing in using the blackberry. As the years went by which increased competition from apple , Microsoft based Windows Mobile phones and presently with google's g-phone, RIMM has been rolling out newer models of blackberry into the market. The latest models to infiltrate the market place have been Blackberry Storm,Blackberry Bold and Blackberry Curve. Each of these phone have bought different feature sets to the marketplace. With Blackberry bold it was the wide display which meant more reading space,

The Storm model was the first blackberry model to bring in touch screen to the Blackberry world keeping in touch with competition from the iphone.
For more detailed reviews on different Blackberry models, please refer to this link.
http://www.mobiletechreview.com/BlackBerry-Reviews.htm
Posted by BI_Buff at 10:10 AM

Email ThisBlogThis!Share to TwitterShare to FacebookShare to Pinterest
Labels: BlackBerry